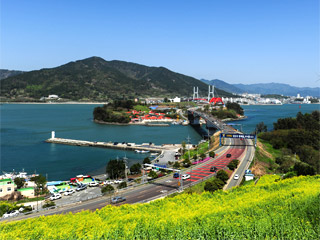 Byunjingeon in Samgukji(the Romance of the Three Kingdoms) introduces 24 nations. One of which is Goshinsiguk, allegedly located in the area of Sacheon. However, there is no clear evidence to associate Goshinsiguk with the modern Sacheon area and the place name. Instead, the story says that there were "Posang 8 nations" located in the west side of Gosung. Historian Chun Kwan-Woo once argued that of these 8 nations was a nation called Samulguk and we presume that the word "samul" of this Samulguk became the original of Sacheon.

Samguksagi(the Chronicles of the Three Kingdoms) is the first place in which the existence of Samul(guk) or the name "samul" appeared for the first time in history. In Book 48 of Samguksagi, Yeolgeon No. 8 Mulgyejajo, and in Book 32, Volume No. 1 AcKayagumjo, a nation named Samulguk appeared in the area of modern Sacheon. Also, of the 12th songs that Uruk created in Ac-Pyoen, the 5th song's was entitled "Samul". From these, we presume that Samul was the origin of the name of Sacheon.

It is not clear how the name of the nation, Samul, was created in the first place. However, given the formation process of the geographical names mentioned above, one may guess that "sa" had the meanings of language and attitude of kings and emperors high-ranking government officer who took charge of recording the events documentation of history beautiful objects with decoration and/or family name, while "mul"has the meanings of denial, nothingness or prohibition. The sound of Chinese character"mul" has the same sound as water "su" in native Korean. They seem to have been switched in use and we think that it must have been a homophone mistake. Meanwhile, the composition of the Chinese character "sa"contains a meaning of decoration or ornaments, and therefore we believe that it is likely to have signified something beautiful or graceful. At the same time, the sound of "sa" is the same as number four (4) in native Korean. Therefore, as both "sa" and "mul"being a loan word, it is likely that Chinese character "sa"meant all four directions, east, west, south and north, and "mul" meant a place surrounded by waters, both sea and rivers. 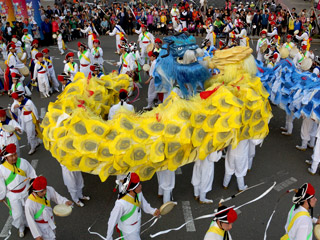 Of Uruk's 12 songsin Book 32, Volume 1 of Samguksagi AcKayagumjo, Se-Kayasa and Samgukyeolgeon sung the meaning of things. In particular, the 5th song, Samulgok interpreted "samul" as one's own mind and thoughts. Nevertheless, the scholars in later generation preferred to interpret Se-Kayasa and Samgukyeolgeon as songs concerning the seat of government or local state-nation. The latter interpretation seems more probably and consistent with the history of Sacheon area.

With all certainty, we believe that the word "samul" appeared for the first time in the early 3rd century literatures as a name of nation which was surrounded by rivers and sea in all four compass directions and thus provided the locals with great natural environment to live in. The name was continued to be used with the initial meaning until mid-8th century. However, under the reign of King Hyunjong of Goryeo Dynasty, in particular in his 2nd year of throne, the name was changed to "sasu" as in Sasu-hyun, partly asa homophone mistake. Then later in 1413, by King Taejong of Joseon Dynasty and his reorganization of administrative district the name was changed into "sacheon" as we call it now.

Around 209A.D., the early days of the Three Kingdoms, Samulguk was one of Posang 8 nations which was a league of minor countiesin chiefdom societies. Samulguk was a nation situated in the region of modern Sacheon. Of these Posang 8 nations also was Gonmiguk in Gonyang area. Around 550A.D., Samulguk and Gonmiguk were brought to subjection of Baekje, one of the Three Kingdoms. However, by the time of King Jingheung of Shilla, especially around in his 23rd year of reign (562), both nations were defeated in Shilla's invasion led by General Isabu and HwarangSadaham, member of Shilla's elite youth corps, and they shamefully disappeared from history.

Upon the unification of the Three Kingdoms, Shilla launched the reorganization of local and rural areas to control the nation more effectively. Thus, by the time of King Shinmunin his 5th year of reign, the entire territories of Shilla was divided by 9 provinces, each having "ju', "gun", "hyun" as sub-provincial administrative divisions, and the central government office was established in Chungju (Jinju in modern times). One of the guns in Chungju was Goja-gun, to which Samul-hyun belonged as its sub-division. In the meantime, Gonmiguk, which was defeated by Shilla along with Samulguk, was put into Handasa-gun(Hadong in modern times) and became Pochon-hyun.

The origin of modern Sacheon, its name, is traced back to a native Korean word, "samul", which was renamed "sasu", then "saju", and finally"sacheon". King Taejong of Goryeo Dynasty, in his23rd year of reign (904A.D.), changed the name of Gangju to Jinju and Haeup-hyun to Gonmyung-hyun. Under King Sejong the Great of Joseon Dynasty, Gonmyung-hyun was promoted to a gun and named Gonyang-gun. Current Gonyang, Gonmyung, Seopomyun, the western parts of the City of Sacheon, went through the similar name change process.

King Sungjong, in his 14th year of reign (995A.D.), reorganized the nation's administrative districts and put Sasu-hyun into Jinjumok in Sanamdo, one of the 10 "do"s (province) of Joseon. Even prior to this, Sasu-hyun had many historical significances. For example, in the 11th year of King Sunjong's reign, Tongyangchang, one of the 13 national granaries was ordered to be constructed in Sasu-hyun. Ook (King Anjong), the 8th son of King Taejo, the founder of Joseon Dynasty, was exiled to Sasu-hyun. Under King Hyunjong of Goryeo Dynasty, in his 2nd year of reign (1011), Sasu-hyung was revered as pungpaejihyang, meaning the birthplace of a founder of a nation and thus the name "Sasu" was changed into "Saju". In his 9th year of reign (1018), Gonmyung-hyun, which used to belong to Hadong-gun was positioned under Jinjumok as its sub-division. Under King Myungjong, especially in his 2nd year of reign (1172),Gammu, a government officer who was dispatched by the king's central government for centralization of power, was appointed in Sasu for the first time. Also, Sasu was promoted from a sub-division of Jinjumok to a chief hyun governed by "Oegwan", another central officer appointed by the king himself.

By the time of Joseon Dynasty, in particular under King Taejong in his 13th year of reign (October 1413), provincial district names, including "do", "gun", and "hyun", were once again changed. At this time, "Saju" from Goryeo was renamed "Sacheon" and "Gammu" was renamed "Hyungamm" (a.k.a. Dongsung). In his 15th year of reign (September 1415), King Taejong designated Sacheon as a military point to defend the nation against the Japanese's invasion and installed a new governmental position called "Sachun-jin", which took charge of both political and military affairs in Sacheon.